Can Creativity & Innovation Be Planned?

Busy work. The phrase itself conjures up sensations of boredom and frustration. According to Merriam-Webster, busy work is “work that usually appears productive or of intrinsic value but actually only keeps one occupied.” Unless you’re a creativity machine with nothing but innovation oozing out from your ears, you’re both familiar and fed up with busy work.

Creativity Is Not Scheduled, but Fostered

Busy work is prevalent in the workplace because ideas that solve problems aren't always developed the exact same way. What works on one project may be a waste of time on the next. We need creativity so we can come up with new ways to solve problems. Creativity and innovation are necessary to do meaningful work, but how do you plan to be innovative? How many people do you know whose to-do lists include tasks like, “From 12:30-1:15pm on Monday, come up with creative ideas that solve problems”?

Research on “Energy Mapping” conducted by Wayne Baker and Rob Cross at the Harvard Business Review suggests that having common areas where teams or individuals can randomly gather helps both individuals and teams. When one worker asks another what they’re working on, the explanations and conversations that follow create connections.

Brief as they may be, these connections are just what colleagues need to think creatively. By communicating an idea to peers, far away from any pressure to have already figured out all the details, employees will feel as though they’ve stumbled upon creative ideas. According to the research, however, what feels like a “stumbling upon” process is actually an activity that cultivates creativity.

Creating space for connections requires intentionality on the part of executives and leaders. Giving speeches to underline the importance of thinking up great ideas creates pressure that ironically can reduce the possibility of those great ideas occuring. A more effective approach is to budget space for comfortable social areas within the workplace where employees can engage with one another and foster each other’s ideas, whether the executive is present or not.

Cultivation Tip #2: Look for the Right Kind of Creativity

There are actually two different types of creativity. Understanding the difference between them is important for leaders who need creative thinkers working for them. In a piece for Forbes, Dorie Clark, Marketing Strategist and professor at Duke University, outlined the two different kinds of creativity.

First, “conceptual creativity” is the kind we see in movies. This “eureka” experience, where problems and solutions align in a moment of brilliant genius, don’t occur as often as one would hope. While these events do take place every now and then (or every day if you’re Kanye West), they aren’t the ideas that makeup the day-to-day of a company.

The second type of creativity is more meaningful but less glamorous. According to Professor Clark, “empirical creativity” is the experimental kind that develops and evolves gradually. University of Chicago economist David Galenson notes the importance of nurturing empirical creativity, “If an organization only rewards conceptual creativity, it’s missing out on some major insights.”

To ensure the right ideas show up, executives should avoid the mistake of looking for conceptual creativity when what they really need is the empirical kind. Every organization could use a Steve Jobs, but they also need a Steve Wozniak. Empirical creatives think up several small ideas that make the execution of big ideas possible.

Psychologist C. Lloyd Morgan said in 1930, “Saturate your mind with your subject, then wait.”

Looming deadlines often cause employees to think they’d be wrong to step away from their work and take a break. The fear of being perceived as lazy may keep your employees at their desks, but it certainly won’t result in the best work.

Once your employees are aware of the problem within their task, the act of stepping away is essential if they’re to naturally arrive at a solution. In a Gensler survey of over 4,000 employees throughout the world, the top performers were those whose work/life balance remained healthy throughout all periods of stress at work. In fact, 80% of those who remained glued to their desks reported less job satisfaction. Temporarily stepping away from a task enables one to focus on something else, enjoy a snack or meal, and come back to the task with fresh eyes. 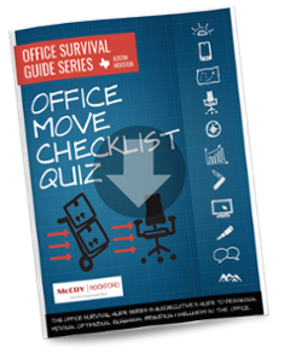 Is your company ready for an office move?

Find out with our Office Move Checklist Quiz!